Between 2014 and 2020 India fell 26 places on the EIU (Economic Intelligence Unit) democracy index. In the same period, stark falls have been recorded in India’s rankings on similar democratic indices. What is driving this process, and why should we be concerned?

While a myriad of varyingly minimalist and maximalist definitions of democracy exist, many interpretations conceive of democracy as going beyond simple electoral procedure, as embodying those principles which, not only elect a leader, but also sustain fair democratic participation and outcomes. These include human rights, a free press and freedom of association and belief.

Democratic backsliding can then be conceptualised as the reversal of this process. It has been described by Elizabeth Lust and David Waldner (2015) as “the deterioration of qualities associated with democratic governance within any regime.” Not to be confused with outright autocracy or regime change, it is the finer erosion of democratic norms that set a country on the path to autocracy. The consequences of democratic backsliding are significant and in the case of India, where rule of law and civil liberties begin to erode, they disproportionately impact minority groups.

A portrait of India in democratic decline 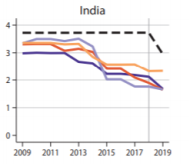 As seen in figure 1, a stark and negative change in the trajectories of several democratic indicators has coincided with the victory of the BJP’s (Bharatiya Janata Party) Narendra Modi in the 2014 Indian General Election. Both BJP and Modi have courted controversy and serious concerns from a plethora of human rights and advocacy groups in recent years. They have been accused of promulgating an extremist, far-right Hindu supremacist ideology- inherited from its parent entity the RSS (Rashtriya Swayamsevak Sangh)- a paramilitary, right wing Hindu nationalist organisation- one that seeks to undermine the secular foundations India was built upon. The political atmosphere of the last seven years has also coincided with a rise in religiously motivated violence, such as ‘cattle vigilantism’ where those partaking in the sale or consumption of beef have been maimed or killed, with the perpetrators of the violence often facing little to no action from the state.

Modi himself garnered notoriety for being Chief Minister of the state of Gujarat during the 2002 Gujarat riots, where communal violence resulted in the death of 3000, predominantly Muslim people, in what has been described as a premeditated political pogrom, and by some experts as even meeting some definitions of a genocide (Garlough, 2013). Modi was highly criticised for the complicity of the state’s political and security apparatus in abetting the violence and interfering with subsequent inquiries. Amnesty International (2003) commented “the same police force that was accused of colluding with the attackers was put in charge of the investigations into the massacres, undermining the process of delivery of justice to the victims.”

Freedom House (FH), an American NGO that analyses the state of democracy in the world, published a report last year that demoted the quality of Indian democracy from ‘free’ to ‘partly free’, marking the first time this has happened to the South Asian democracy in the 21st century. The report attributes this decline to “a multiyear pattern in which the Hindu Nationalist government and its allies have presided over rising violence and discriminatory policies affecting the Muslim population and pursued a crackdown on expressions of dissent by media, academics, civil society groups and protestors.”

In particular, the FH report outlines several major events and developments that underline India’s steep democratic decline. Among them is the 2020 Delhi riots, where approximately 50 people were killed (enabled by the inaction and even assistance of the Delhi police). An increasing crackdown on dissident journalists, intellectuals and activists under the auspices of sedition and legislative developments that have disproportionately affected and discriminated against religious minorities, such as the 2019 Citizenship Amendment Act, configured to provide a pathway to citizenship for number of religions but conspicuously excludes Muslim refugees. Finally, an increasingly compromised and intimidated judiciary, which recently acquitted senior members of the BJP for their role in inciting events surrounding communal violence associated with the destruction of the 16th century Babri mosque. Freedom House also compiles a separate metric for Indian administered Kashmir, a disputed territory with neighbouring Pakistan. The figures for Kashmir under BJP rule are lower still, having being demoted to ‘not free’ in 2020 after significant political repression, including media blackouts and the imposition of curfews following a 2019 bill that revoked Kashmir’s special status as a disputed territory, and set it on the path to full absorption by the Indian federal state system – a move long promised by the BJP.

With overwhelming popularity and further electoral gains made in the 2019 General election, the BJP appear to be only further emboldened in their mission to remould India’s secular social and political foundations into the majoritarian vision their leaders have long dreamed.

It is important to note that India’s electoral system, while being subject to instances of relatively low-level corruption and intimidation compared to other institutions such as the police and lower levels of the judiciary, has yet remained mainly robust (Freedom House, 2021). Its decline in democracy relates particularly to its erosion of civil liberties and its weakening media and political institutions. Political theorists Levitsky and Ziblatt (2018) describe these trends as being symptomatic of a breakdown in ‘mutual toleration’ that is indicative of a democracy in peril.

From its inception in 1947, the modern state of India was conceived as a secular democratic nation. In 1950 this was embodied in its constitution which guaranteed every citizen “justice, social, economic and political; liberty of thought, expression, belief, faith and worship; and equality of status and of opportunity.” 71 years on from its adoption, these three tenets that the Indian constitution were premised on are under significant threat.